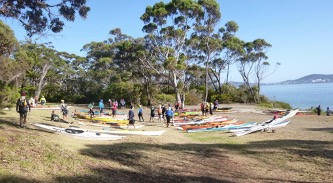 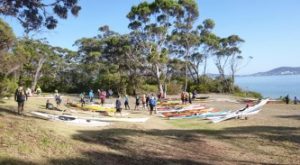 Seven Swan Canoe Club members, including myself, attended the Sea Kayak Festival 2020 held in Albany over the long weekend 28th Feb – 2nd March. For some it was their first Sea Kayak Festival, and others who had been to at least one other fest had the opportunity to catch up with acquaintances from previous fests.

Apart from the guided paddling trips, we were entertained by four guest speakers, Les Allen, Dave Winkworth, Stuart Trueman and Shaan Gresser. Les, one of the founding members of the Sea Kayak Club WA, has spent the last three years traveling and kayaking on the east coast and Tasmania. Les gave a slide show of some of the amazing coastline and paddling trips he had been on.

This is the third time Dave Winkworth, a long-time member of the NSW Sea Kayak Club, came across for the WA Sea Kayak Fest. Dave gave a presentation on how we can make club paddling trips more interesting. He also showed us how to make a tow/ throw bag, how to make a kayak seat, showed us how the kayak is affected by wind and then gave us a practical session on the do’s and don’ts of ‘V’ towing.

Stuart, a member of the NSW Sea Kayak Club gave two presentations, one on kayaking in Antarctica and the Artic and one on his round Australia trip. Both presentations were accompanied by some amazing pictures of wildlife and scenery.

Shaan, also from the NSW Sea Kayak Club is the first female to cross Bass strait solo non-stop. Shaan gave us an insight into how the idea of the crossing came about and the training and logistics of the crossing. Shaan also gave us an interesting talk on her philosophy around food and nutrition.

Paul Cooper from the Sea Kayak Club WA gave us a practical demonstration on how to fit a sail to a sea kayak. Having a sail on your sea kayak adds another dimension to sea kayaking.

The padding trips were a mixture of distances and difficulty to accommodate all level of skills. Not all participants chose to paddle each day, some opting to go on one of the many walks near the camp where there is some amazing scenery – well it is called the Amazing South Coast.

All the SCC members who I spoke to thought the weekend was great. Even though the weather was not favourable at times everyone seemed to go away with a smile on their face. Looking forward to seeing more Swan Canoe Club members at the next WA Sea Kayak Festival.

The WA Sea Kayak Festival was organised and run by Paddle WA and the Sea Kayak Club WA.

Thanks to the SCC committee for their support and making the club rooms available for meetings of the fest committee.