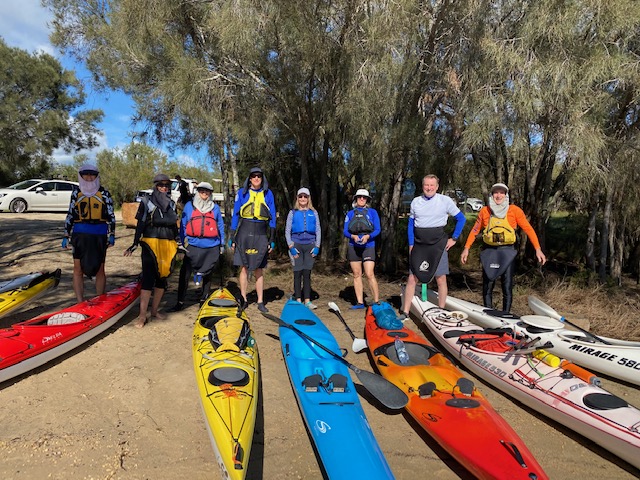 After a delay due to last weeks’ high winds and poor weather, the club Serpentine River paddle took place on Sunday 27th September. To everyone’s surprise we had sunshine, light winds and a great paddle. Our original group of seventeen paddlers was reduced to nine, but “We few, we happy few…” had a lot of fun, including an interesting, somewhat wet display of Zen Kayaking by Dale, done completely without a kayak!

Once on the water, Janet, Jocelyn, Carol, Evi, Dale, Steve, Paul, Mike and Geoff headed north up the Serpentine and into Yalbanberup Pool. There were some navigational challenges and shallow-water, but they failed to detract from the pleasure of the paddle.
We were kept on our pedals by fish jumping, squadrons of pelicans skimming and circling and even an unidentified animal leaping out of the reeds and over Janet’s kayak!

Continuing up Guanarnup Pool, Steve acted as ‘tail end Charlie,’ making sure we didn’t lose too many paddlers to the lurking reed islands. We made good progress over the next nine kilometres without having to use the whip much at all. Powered by Evi’s liquorice allsorts we made it to the island lunch stop a bit early and decided to continue further upstream. Along the way we cruised under the local farmer’s decrepit bridge and took a few short-cuts across the river loops, before finding a floating barrier after about two kilometres. There was speculation as to whether it was a secret crocodile farm, a barrier to trap tiger snakes or trying to reduce salinity, but hunger overwhelmed the speculation and we headed back for lunch.

As we were disembarking, Dale gave us a demonstration of Zen Kayaking, where you imagine there is a kayak beneath you as you sit on the water and paddle. It was an entertaining demonstration, but we all agreed it needs a bit more work. Lunch on the grass was very pleasant, especially for the mosquitoes that joined us. Fortunately, a few people had remembered to bring RID which eventually blunted the mosquito’s enthusiasm for human flesh, although Mike remained popular.

After lunch we retraced our track and got back to the cars as the clouds moved in. Once packed up, thoughts of a chilled glass of wine, while slumped in the bath had us heading for home. Overall, we were lucky with the lack of wind and rain and enjoyed an interesting paddle with great company. Or at least I thought I was great company, but I might be wrong.