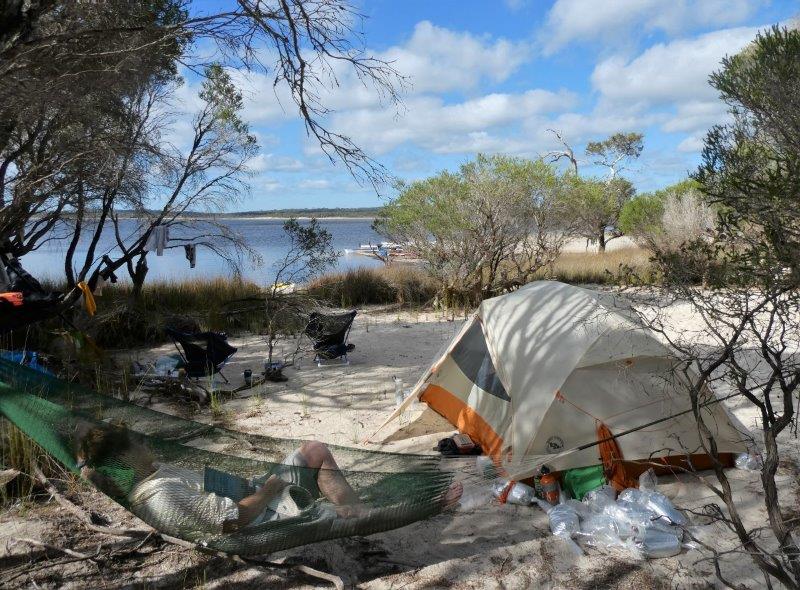 Another successful trip down to Broke for our Australia Day celebrations – with a baker’s dozen of keen paddlers participating, and the same number returning to Perth to fight another day – what more could your trip organiser ask for?

With an advance party of eight hearty souls arriving at Camfield on Friday we discovered Parks and Wildlife were ‘misinformed’ and the bar was in fact closed and hence water levels similarly low to last year. Nevertheless we set across to establish base camp at Windy Point in sunny conditions (almost tropical for this part of WA) and enjoyed the serenity!

Next morning, and another sunny day, the advance party went off to check the ocean (via Coal Point) and give Steve a chance to try out his new sail along with Geoff and Colin P, and Elena to have swim, before a rather long slog back to meet the remaining five at Camfield for the ‘official start and briefing’. For those with new VHF radios, call signs were allocated with Rose becoming ‘Petal’ (naturally) and Suzie suggesting we just keep it simple and use names – hence her official call sign is now ‘Simple’!

Low water meant a circuitous route across to Windy Point, but we were a tough lot.  At camp Trish impressed everyone with her latest acquisition – a functional tent (albeit minus a fly sheet) for the princely sum of $5!  (Does the club need a new treasurer?).

At night we enjoyed our usual ‘virtual campfire’ gathering under Geoff’s tarp where nibbles and wine are shared in abundance whilst making sideway’s glances at those attempting to cook ’something proper’. One of the good games is to open packets of freeze dried meals and try and guess what they could be, with all inevitably looking the same and bearing a striking resemblance to kitty litter!

Next day your grumpy trip organiser did a relocation to more fashionable area of real estate within the camp to escape the snorers – by moving up to ‘Urea Heights’ where, despite almost panoramic views, Rose claims to have detected a scent of something suggesting night-time wee stops.

After morning Tai Chi led by the very patient Rowan, we headed off to the Shannon River via Shannon Island. Despite crystal clear compass bearings we did take quite a while to eventually find the entrance after traversing large areas of painfully shallow water. Once on the river however it was very pleasant paddling in deep water all the way up to Springbreak Road where it was discovered the trip organiser had failed to make an exclusive booking and the area was inhabited by other members of the human race. So, after a bout of synchronised kayaking (the very difficult colour-co-ordinated star formation no less) we headed back for a sumptuous lunch at the beach where the river meets the inlet.  A good long paddle back to camp ensured we all got a good night’s sleep.

Next day (after a glorious sunrise) and for some, participation with Elena’s Qi Gong exercises, we headed back to the ocean beach. En-route the heavens opened and despite Sue presenting a very fashionable pink rain jacket to save Phyll from getting drenched, it was determined to be either the wrong colour or insufficiently elegant – and hence Phyll returned to camp to join Rowan who had earlier damaged a fetlock whilst attempting a 100 m sprint in pursuit of a runaway Ikea bag.

At the beach we braved the winds for selfies and resisted the temptation to climb the western headland before heading back along the scenic channel to Coal Point. From there all returned to camp for a lazy arvo snooze or read while Colin and myself headed off confidently towards Bald Island.

After a short while the winds increased in strength and it became a rather long slog (although neither would admit it to the other!). We climbed the granite monolith and had lunch with great view to Clarke Is, Birthday Beach and almost the full length of the inlet back up to Shannon Island. The wind then dropped and allowed us a very pleasant sailing / surfing trip directly back to camp with only a gentle breeze behind us.  Nearly 2 hrs to get there and less than half an hour going back!

Australia Day breakfast at camp with obligatory singing of our national anthem (song sheets courtesy of Geoff) and for those of Scottish blood you will be pleased to know that a poem by Robbie Burns was masterfully delivered by Elena one or two night’s before.

Departed early on Tuesday to get back before too much traffic although it proved to be a smooth straight run home (at least for me).

Thank you all for a great extended weekend – these trips are made by the comaraderie of the group and I look forward to many more with yourselves (and other Swannies please) during the coming years.