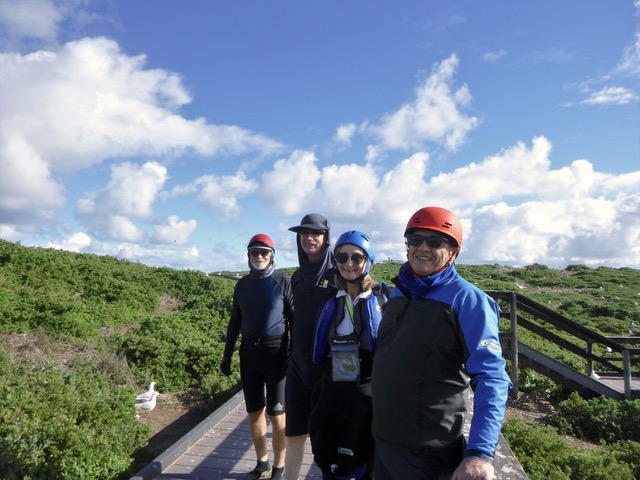 If you ever doubted that we live in the windy west, the last couple of weekends with winds up to twenty knots or about thirty-six kilometres per hour, should have removed all doubts.

The club had planned a Palm Beach to Penguin Island paddle on the 30th May, but storm and tempest put paid to that, and we re-scheduled to Sunday 6th June. The forecast still wasn’t great, with the windspeed starting at ten to fifteen knots and working up toward twenty knots in the afternoon. The seas were going to be at least a metre high and the swell up to two and a half metres which implied that there could be waves about two and a half metres high. On top of that a front was expected and it was going to rain!

Maybe it wasn’t surprising that paddler numbers dropped from an initial sixteen souls down to eleven by Sunday! This included three new paddlers without a lot of ocean experience. After a briefing on Palm Beach, we hit the water and paddled west about three kilometres to John Point where there was a lot of surf breaking over the reef. We headed out to sea, behind the breakers and were paddling south when I heard Martin call out ‘capsize!’ Looking back, I was impressed to see Patrick successfully roll up from his unplanned capsize! Obviously, all that practice he had done at the club paid off when it really mattered.

We passed  Bird Island and paddled on to Seal Island where the sea lions were having a siesta in the sun, undisturbed by all the pelicans waddling about. After a break for a sugar hit, we paddled the final two kilometres to Penguin Island, landing on the East side instead of the usual West side out of respect for the conditions and our newer paddlers. After a leg stretch, sustenance and a toilet break, two of our members decided to wait on shore for pick-up at the Penguin Island café, while the rest of us headed back to Palm Beach. In retrospect they made a smart decision.

As we headed north, we were followed by a grey walled front that rolled after us. With the weather chasing us it was surprising to be paddling in sunshine and blue sky, with spectacular sunlit clouds in front of us. Out to sea on our left, there was a grey wall of rain, while on our right another wall of rain fell on the land. The few drops of rain that did fall on us, failed to dampen our enthusiasm. After six kilometres we were back at Point Peron and watching some big surf rolling onto the reef. It all looked a bit daunting, but our intrepid crew followed Colin as he picked his way around the point and then out to sea again, just south of Mushroom Rock. There was a large swell, waves breaking and a very disturbed sea so that our kayaks were slipping and sliding, and one had to stay focussed. After a somewhat harrowing trip behind the breaking surf, we managed to thread the needle between two patches of reef and get into shelter behind John Point, where we relaxed somewhat and paddled back to Palm Beach.

In retrospect I would have been wiser to avoid the mayhem off John Point and launch from Shoalwater Bay.

Nevertheless, it was an experience for everyone, albeit a bit challenging in places. Local Hero awards are deserved for newer ocean paddlers, Carol, Jocelyn and Peter for handling pretty marginal conditions. Patrick also deserves his own Local Hero award plus bar, for his spectacular roll near the reef. I would also like to thank my co-sea kayak instructor, Colin Priest for his calm approach and for looking after everyone.

Well done everyone for managing a very challenging paddle.