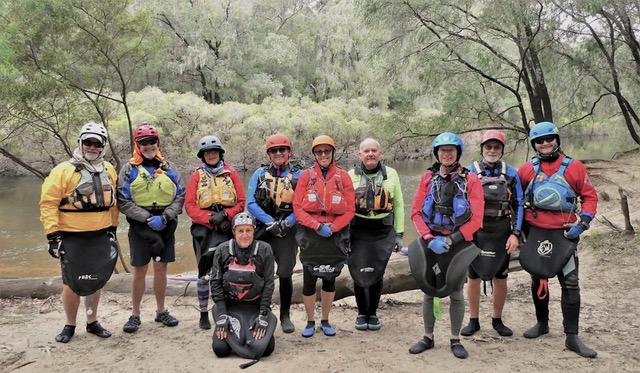 On Friday the fifth of November, eleven paddlers arrived at the Warner Glen Campsite on the Blackwood River, for our annual Swan Canoe Club trip. As in past years, it was well organized by Colin Priest with his usual attention to detail. Our merry band included the Swan Canoe Club crew, of Colin and Gail Priest, Colin Scully, Jocelyn, Phyll, Des and Geoff Emery. This year we also had four Sea Kayak Club members, Pel, Chris, Austin and Jacob come along too. Friday night was spent around the campfire getting to know each other and telling tall tales.

On Saturday, the weather was a bit overcast and the water level was about 1.52 metres at Hut Pool, where we left two vehicles, before driving on to Sue’s Bridge. Unfortunately, Gail had an injury which meant that she couldn’t paddle and instead spent her time walking and taking her usual high-quality photographs. We anticipated a fast trip with the higher water level, but there was less fun to be had playing, as many rapids were washed out. Fortunately, the excellent company and scenery compensated for the reduced rapid playtime. Nevertheless, there were some spills and thrills and a few near misses. Chris grew to love the rapids, while Pel became intimate with a few logs. Austin showed his previous white-water experience and was the master of the open V chute. His wise words were “It’s all about reading the water.”

Meantime, Jocelyn who enjoys getting out in nature, was admiring the riverside foliage when she decided to have a close inspection from underwater. Phyll showed impressive female solidarity by joining her for a swim too. The two Colins and Geoff helped the girls back into their boats and we all paddled on downriver with some of us damp but refreshed.

The paddlers in the short white-water boats had to work hard to keep up with the group, but usually caught up at each rapid. Jacob was working particularly hard, as his low volume kayak was taking water and didn’t have a lot of buoyancy. Colin Scully, Des and Geoff were also paddling short boats and tended to drift to the back of the group, despite paddling hard while Phyll, Jocelyn and Austin in the longer plastic kayaks were steaming ahead at the front. Our lunch break, at about ten kilometres downstream from Sue’s Bridge was welcomed by all, especially as we knew we had another nine or so kilometres to go before Hut Pool. With lunch over and back on the water, we soon arrived at Hut Pool, where water was running over the weir. It was good to stretch the legs and change into dry clothes before collecting vehicles and heading back to camp.

That night there were some tired paddlers sitting around the campfire at Warner Glen, enjoying a wine or three and telling war stories. The rapids increased in severity with each telling along with our skills. Eventually we ran out of energy and there was an early drift towards beds. There was a bit of camp envy, as Phyll filled a hot water bottle before heading off to her A-Van Camper ‘Annie’ and Des casually mentioned that he’d turned on the electric blanket in his camper. It was a cold night for the rest of us, warmed only by our sleeping bags and our virtue at avoiding mod cons.

On Sunday morning we awoke to Colin getting the fire going, ready for his breakfast jaffle. After coffee and breakfast, we broke camp and returned to Hut Pool for the thirteen-kilometre paddle down to Chapman Pool. There were occasional glimpses of blue sky, but it remained cold, as we paddled through some small rapids. We had a bit of a play at Morning Tea Rapid before having a break on the bank for morning tea. There were a few more close encounters with rocks and trees and Jacob decided to work on his roll under Des’s guidance, but otherwise all went well. The day got warmer, especially for the slow-moving white-water boats and Des was seen to do a few Eskimo rolls to cool off. Jocelyn and Austin were having a race up ahead of us and Austin while impressed by Jocelyn’s speed, was less impressed when she beat him. After a tiring paddle, the Warner Glen Bridge was a welcome sight and not long after that the creek into Chapman Pool. Once in dry clothes and feeling almost human again, Austin ran Chris and Geoff back to collect their cars from Hut Pool. After a well-earned barbecue lunch, we all headed back to Perth more than a little tired from a great weekend. Thanks to Colin Priest for his usual excellent planning and to his assistants, Colin Scully, Geoff, and Des. While it was great having some Sea Kayak Club members with us, hopefully we might entice a few more Swan Canoe Club members next year. 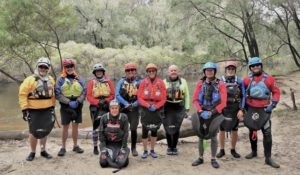 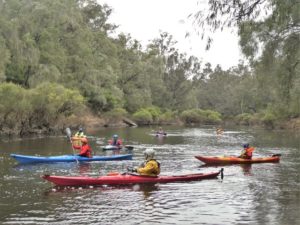 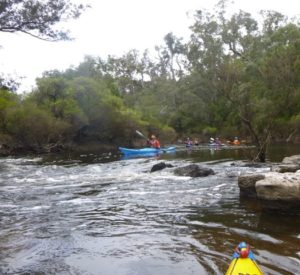 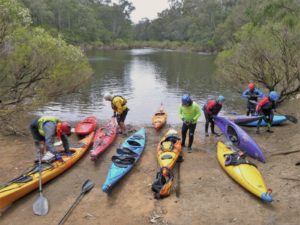 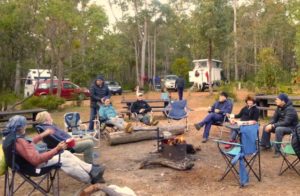 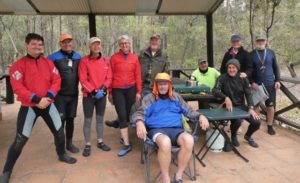 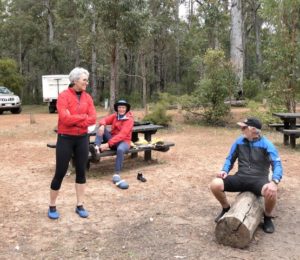 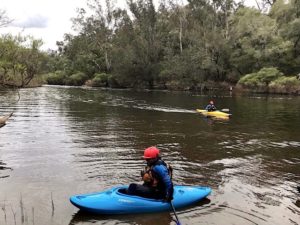 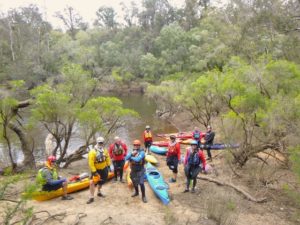 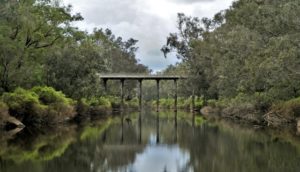