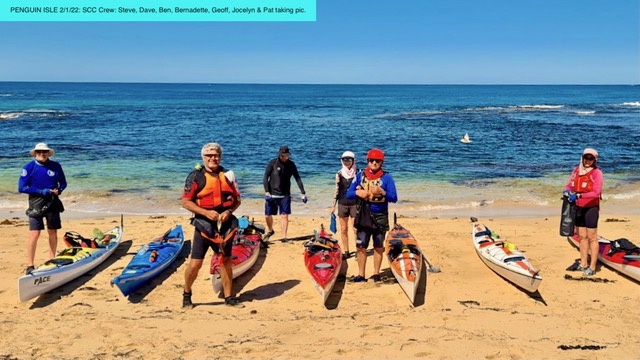 It seemed a long time in the making, but seven of us finally made it to Penguin Island on Sunday the 2nd January 2022.  The original plan was for fourteen, Swan Canoe Club paddlers to do a Penguin Island paddle on the 12thDecember 2021. However, that dreaded strong wind warning, meant we had to abort that trip and so lost a few paddlers along the way.

Things weren’t looking too bright this weekend either, with yet another strong wind warning, predicting winds over twenty knots or a bit over thirty-six kilometres per hour. The only glimmer of hope was that the wind might drop to about ten knots in the morning. To the surprise of all of us, when we launched in Shoalwater Bay about 8.00am, the wind was only seven knots. Not only that, but the sun was shining, the water was a great shade of blue-green and Geoff had finally finished his not so brief, briefing.

With Dave and Pat leading the way, Bernadette and Jocelyn following and Ben, Pat, and Geoff tail-end Charlie’s, we headed nor-west for Bird Island in great conditions. We visited the cave on Bird Island for a few pics and then headed north to Point Peron and picked our way through shallow reef in behind Mushroom Rock. We turned around there and headed south, passed by a grumpy sea-kayaker who didn’t reply to our cheery hello’s. Possibly the fact that he was using a Greenland Paddle, rather than a Euro, made him grumpy?

Jocelyn and Bernadette led us out to sea and around the back of the reef at Point Peron and then down to Seal Island, where the sea lions were not cavorting, despite many onlookers. They looked like overstuffed, brown bean bags, collapsed on the beach with no desire to do anything but melt into the sand. There was lots of bird life, with Pelicans gliding and circling overhead like overgrown white buzzards, just waiting for a kayak capsize.

Steve led us south from there to Penguin Island, where we landed without incident on the west side of Penguin Island for a break and leg stretch. Once more on the water we circumnavigated the island, chatting to Jimmy a Swan Canoe Club member, who owns Capricorn Sea Kayaks and was leading a group of kayakers around the island too. As we headed back north, Jocelyn led us astray into some shallow sea grass on the east side of the island, but by about 11.00am we had reached our starting point in Shoalwater Bay. While Bernadette and Jocelyn went for a swim, Ben gave scores for elegance as Pat, Dave, Steve, and Geoff, practiced their rolling, with varying success and not a lot of elegance.

Once we’d unloaded the boats and put them on the cars, we showered and were ready for a coffee and something to eat at Pengo’s Café. As we drank our coffee and enjoyed the company, we were pleased with our timing, as that ESE wind of about seven to ten knots was now SW at midday and hitting sixteen to eighteen knots, on the way to twenty knots. Overall, a great day, with wonderful conditions and a small group that worked well together. Thanks to Bernadette, Jocelyn, Ben, Dave, Steve, and Pat for a great day and great company. 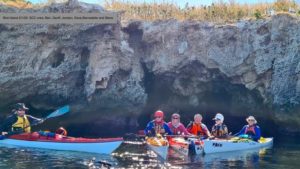 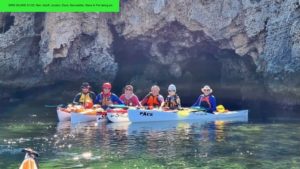 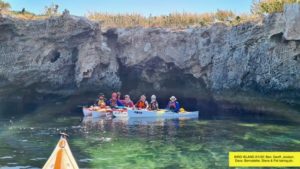