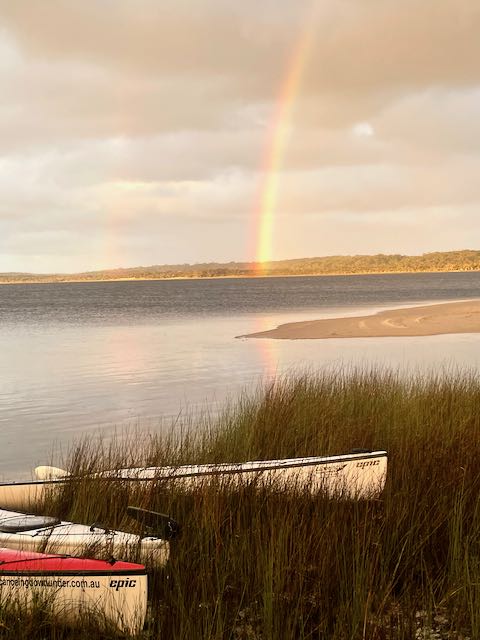 For much of the trip we were rewarded with mild (low twenty degree) temperatures, the occasional gentle pitter patter of rain, and some ‘challenging’ wind conditions (approaching 20 knots on one day) – what more could Swannie paddlers possibly want as an escape from Perth!

On Sunday 23rd a preliminary early morning reccie was undertaken by Geoff and myself to determine we had no competition for our usual ‘Windy Point’ campsite, and while Geoff was supposed to be preparing the red carpet and gin and tonics, I paddled across for the team briefing on the beach at Camfield.

The team was presented with a busy car parking situation, a pleasantly (just) higher water level than last year, and initially warm temperatures. The cats were herded together for the briefing after dragging Phyll away from providing fishing advice to a local power boatie, and we then set across to Windy Point as the wind started increase to what became the norm for much of the trip.

Meanwhile at camp, Geoff discovers and secures an empty fishing boat that has drifted across onto Windy Point and so he returns to Camfield to find the owner/s. Needless to say the boat owner/s, while grateful for his Geoff’s efforts, failed to provide the anticipated carton of cool ones as a reward. Geoff then proceeded back to the campsite under sail but after a convoluted course and a damaged mast, it was decided that Susie’s sailing expertise should be tapped into for advice on any future kayak sailing activities.

Camp set up with Geoff, Marty and Susie in the exclusive real estate of ‘Urea Heights’ and the remainder on sand flats with careful spacing to avoid impact from snoring competitions.  Colin was the next to make a return trip to Camfield in order to retrieve a second tent after his and Elena’s borrowed one didn’t live up to expectations upon set-up.

This, and subsequent, evenings were spent in social camaraderie (otherwise referred to by some as ‘jaw-boning’) under the cover of Geoff’s tarp and around our virtual campfires. Meals were critiqued and many benefited by the addition of copious amounts of parmesan cheese and red wine. The beers sadly didn’t retain their coolness for long and much discussion devoted to how a decent small solar powered esky could be developed for Broke trips – this matter being left for Colin to resolve before next year.  Massages were dispensed by Elena and Geoff with a passion and strength to match those of previous years, and with no subsequent trips to physios that I have heard of – so far!

Monday 24th was a tad windy with up to 20 knots from the south east at times. We headed down wind towards Shannon River – initially a cruisy journey with paddle blades acting as sails as we generally stuck close to the shore. It became more challenging as we needed to head more side-on to the waves (in shallow water) to get to the entrance into Shannon River. This involved a bit of wading dragging boats but thereafter we were protected from the wind and it was a pleasant meandering paddle upstream to the spot off Springbreak Road for lunch. The return journey across the inlet and into the wind was a good workout, and on completion of about 25 km that day it ensured we had no excuse for not being able to sleep that night.

Tuesday 25th saw four of the team opt for a day relaxing in camp as the predominantly south easterly wind remained, although not as strong. Susie’s beachcomber immediately developed rudder cable problems and Elena kindly lent her the Stellar for the day, with Geoff and Colin volunteering to attempt a repair rather than just relaxing in camp.  Six of us then set out into the teeth of the wind (mild exaggeration permitted) heading for the shore east of Coal Point where, flushed with renewed energy, we decided to go on to Birthday Beach and Bald Island.

Landing on the sheltered beach around the corner from Birthday Beach we explored this beautiful area with its granite boulders masquerading as large loaves of bread and the secluded camp sites amongst the trees. All rather special in the absence of any other campers due to Fisherman’s track being closed to 4WDs by Parks and Wildlife to prevent disturbance to migratory bird nesting sites around Coal Point and the inlet sand-bar.   Lunch was held on top of the granite dome of Bald Island where unsuccessful attempts made to radio back to those on Windy Point that all was AOK. Return trip with wind behind us was made without incident by remaining close to shore again. Given the lack of earlier radio contact we were met by Geoff and Colin coming out to escort us back in after a total of about 18 km this day.

Wednesday 26th Australia Day! was marked by a communal breakfast and games of Bocce before Susie and Trish (with Geoff as escort) headed across to Camfield for departure to Perth. All others then paddled in lighter winds towards the inlet sand-bar and ocean beach. Geoff had another sail attempting to catch us before reaching the ocean sand-bar but was foiled by shallow water off Coal point. Winds strengthened at the ocean with some opting to return back to camp while the Marjan, Paul, Ruth and myself found a protected secluded sheltered area around the headland for lunch as we watched the wonderfully wild southern ocean do its thing! A pleasant return paddle to camp notched up 13 km for this day.

On return to camp (and in tune with some interpretation of the significance of Jan 26th) we were invaded!  Five members of Action Outdoors Association (AOA) led by Phyll’s close associate, Richard Jolley, had paddled across to share our sacred campground for the evening. Although we maintained our separate groupings for the evening we felt it appropriate to let AOA know we were having a good time on our last night at Windy Point – with Ruth leading a chorus of artificially loud fake laughter at regular intervals. (we had been away from civilization for too long by that stage!).

Thursday 27th. Despite plans for a relaxed start we were all packed and ready for the paddle back to Camfield at least half an hour ahead of schedule – certainly a first for your’s truly!. While Paul and Ruth headed off to Pemberton’s Karri Lake resort for more R and R, the remaining six of us headed back home to Perth with a lunch stop (in clean clothes!) in Balingup.

Reflecting on highlights, Geoff deserved a ‘best bit of gear’ award with his tarp providing a great fun game as it caught the evening rain which, with a strategic poke here and there, could be directed to channel runoff into water bottles or, better still, down someone’s back as they huddled below. The Bocce set brought along by Paul and Ruth was a great addition for the celebration of Australia Day – with Marjan crowned as the ‘Broke Bocce Queen’ and any foot-faults by her (and others) being dutifully ignored by Phyll, as self appointed scorer.

Paul should receive a “misplaced pride in frugality” award after proudly claiming success in purchasing a very cheap camp chair “absolutely identical to those expensive Helinox ones” only to end up ‘breaking thru’ to the ground on more than one occasion despite best repair efforts with gaffa tape and cable ties. More successful repairs were effected on Susie’s kayak by the ever-helpful team of Geoff and Colin.

Elena kept the ‘energy flows’ moving for most of us with her constant supply of healthy food nibbles and her early morning Qi Gong exercises. Trish amazed all with her packing skills and lightness of kayak (although it may have had something to do with discarding certain unnecessary items such as a sleeping mat, tent fly, warm clothes, cooking equipment and food etc).  Phyll demonstrated her ‘way with men’ by soliciting a free cuddle from AOA’s Richard, and Ruth used her formidable nursing skills to stem the flow of blood from wounds on at least three occasions. Finally, Susie (she of the new radio call sign of ‘mellow yellow’) should be encouraged to take on the club role of kayak sailing coach (and potential regatta organiser) after demonstrating her uncanny ability to pick, and deal with, impending wind gusts just before they hit.

Thank you all for contributing your patience and humour to a challenging but fun trip.