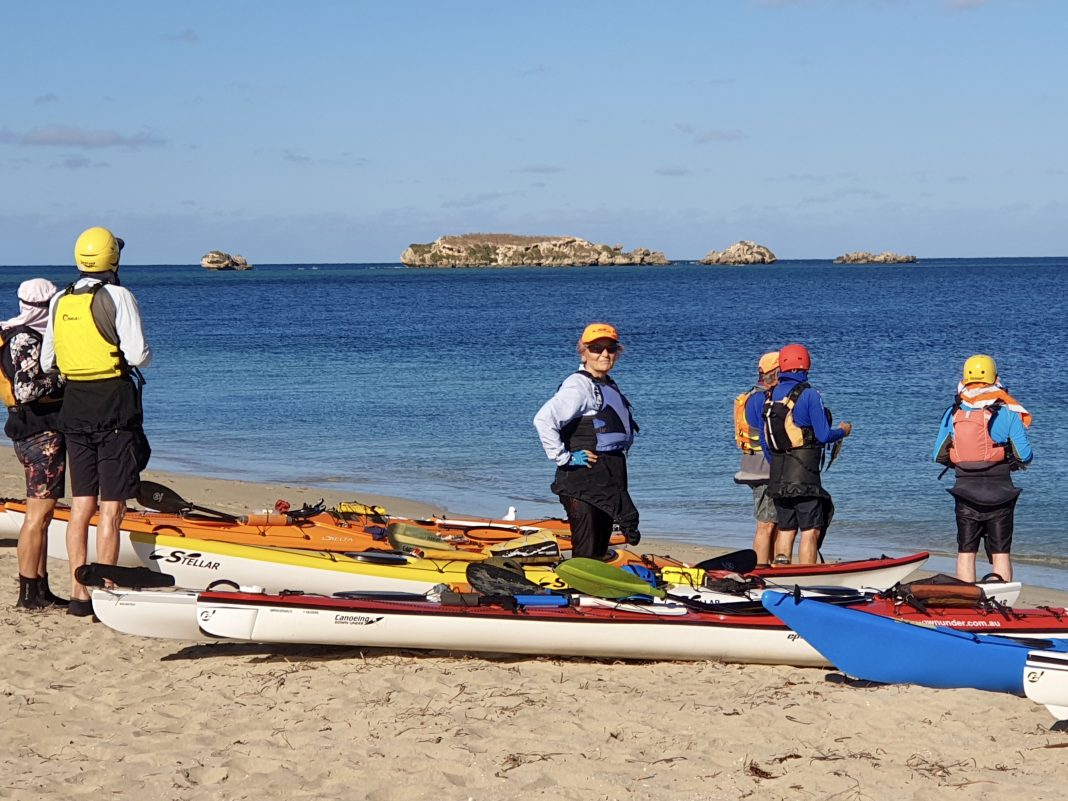 A Windy Day in Shoalwater Bay

While you might think that work is the curse of the paddling class, for me it’s the wind. At this time of year, the weather gods take delight in sending us easterly winds, that often get up over twenty knots and do more than ruffle my thinning hair.

We’d planned the Shoalwater Bay paddle for Sunday, the twenty-seventh of February and not unexpectedly the weather gods, probably with a sinister chuckle, gave us a strong wind warning. Undeterred, ten hardy Swan Canoe Club paddlers went south anyway, and found that the wind was a gentler fifteen or so knots or twenty-seven kilometres an hour if you prefer. There was the usual scramble to unload boats and gear, carry the kayaks to the water’s edge and get ready for a briefing, before hitting the water. I was impressed that everyone was on time and ready to go, no doubt hoping for a briefer briefing from me.

Martin ‘Delta’ Wells led us off the beach and north west toward Bird Island, while Rowan ‘Badger’ Davidson was our man in the middle, leaving Geoff “Two Dogs” Emery to be the tail-end Charlie. We had the usual suspects, ‘Eskimo Roll’ Mike, ‘Epic’ Trish, ‘Ozgirl’ Janet, ‘I Brake for No-one’ Evi, ‘Qi Gong’ Elena, ‘No Dog’ Colin and ‘New Girl’ Fran. The wind fetch and the resulting waves increased as we paddled further out from the shore, and a rudder problem in the Scorpio made it difficult for Fran to control the boat. Trish was also having some rudder problems but managing o.k. It was somewhat of a relief to get in to the lee of Bird Island and have a break in the green lagoon there, adjoining the small cave. Having had a rest and girded our loins once more, Martin led us north to Point Peron where we had to dodge a few snorkellers and a side sea that was determined to push us onto rocks. With the wind rising, we abandoned Mushroom Rock and turned south toward Seal Island.

The wind increased, gusting at times to twenty knots, creating a few white caps and the occasional breaking wave, but overall, the kayaks felt more stable punching into the wind, rather than being pushed from behind into a broach. We made Seal Island and met up with Jimmy and his flotilla of double sea kayaks from Capricorn Sea Kayaks and had a chat. The three sea lions sleeping on the beach appeared uninterested in the crowd of onlookers, and after weaving our way through all the craft, we paddled on south to Penguin Island.

In view of the forecast twenty to twenty five knots of wind from the south west, we landed on the east side of Penguin Island and had a leg stretch and some brunch on the west side of the island. In fact, there wasn’t a lot of surf on the west side and in retrospect, it would have been a straight forward landing. Having attempted a repair of the Scorpio rudder, we headed off north to Gull Rock and Seal Island once more, with Mike leading us back to shore, near Manuel Towers.

Once the kayaks were loaded on the cars, we headed down to Pengo’s for some social distancing and a coffee. At the end of the day, I was impressed that Fran, having only started paddling in December, managed her maiden sea voyage, with a damaged rudder. Well done, Fran. Thanks to Martin, Rowan, Elena and Colin for support on the water, to Mike for navigating us back home and to Janet, Trish and Evi for just being there.

A good day on the high seas with good company.