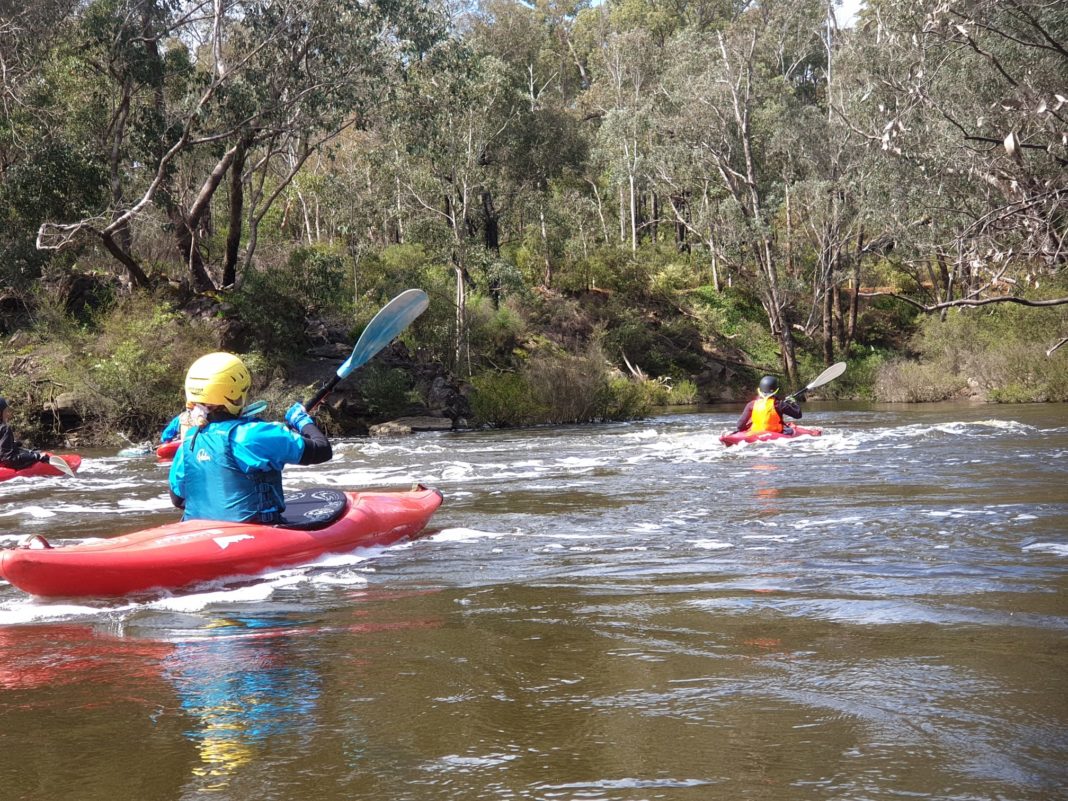 Last Sunday, eleven club paddlers set off from Yarragil on the Upper Murray River to paddle the ten kilometres downstream to the Baden-Powell picnic area. The river was flowing well at a level of about 1.85 metres at the Baden-Powell gauge. Six of the paddlers were relatively new to white water, but what they lacked in experience they made up for with enthusiasm. Even an unexpected swim or two failed to cool them off.

Watching Fran, Vicki, Margie, Kelly, Nick, and Ross, it was great to see them remembering some of the techniques they’d learnt in the Introduction to White Water courses run by Colin Scully, Geoff Emery, and Colin Priest. Colin, Elena, and Des were giving lots of good advice about ferry gliding, breaking in and out and of course remembering to edge or lean the kayak downstream.

Margie was enjoying herself so much, that she became over-heated and decided to flip her yellow Katana to cool off. The problem for the rescuers, was that they couldn’t stop her laughing! Kelly was looking cool, and colour coordinated in her blue Mamba and matching cag. She remained focussed, controlled, and dry all day! Nick was enjoying his red Katana and getting a bit excited, as he pushed himself to play in each rapid. Despite a couple of close calls, he maintained boat control and stayed dry too. Ross was just cruising along in the yellow Tsunami, not feeling the cold in his tee shirt, and enjoying himself. Vicki had difficulty getting the smile off her face and appeared to be enjoying herself way too much, throughout the day. Fran was paddling well, keeping the Dancer straight, when Colin distracted her with a discussion about lip balm. She assumed he wanted her to wash it off and flipped the Dancer near a bush. Determined to remove the offending lip balm, she took her time getting out of the kayak, but finally emerged with clean blue lips. Gillian was enjoying the paddle in the Green Boat, while Elena had a bit of fun surfing across one rapid with her paddle in the air. Colin was doing a good job leading the group, while Geoff as ‘tail-end Charlie’ wasn’t doing much at all.

At about four kilometres from Yarragil, the Island Pool rapid looked a bit intimidating from the top. Des didn’t help the confidence levels a lot when he made the first run and hit something solid on the way through. Nevertheless, one by one, each paddler made the run into a nice open V chute and into the large pool below. Last year at the same rapid we had three or four capsizes, but I was impressed that this year everyone sailed through like experts. The group moved over to river left and beached the boats for a lunch break, while Des, Colin, Elena, Nick, and Geoff had a play on the rapid before joining the luncheon crowd.

Back on the water after lunch, we left Island Pool and paddled about four kilometres to Bob’s Crossing, playing on a few small rapids along the way. The water was running over the roadway at Bob’s Crossing and making a lot of noise, as we got out of our boats on river right and portaged. There was a large and turbulent eddy downstream from Bob’s Crossing and it needed a bit of care getting back on the foamy water. After another two kilometres we reached the Baden-Powell picnic area and our vehicles at about three o’clock, making it a four-hour trip. Once in dry clothes again, Geoff drove Margie back to Yarragil to collect her car and we returned to Baden-Powell to pack boats and gear. From there we drove to the Dwellingup Pub for a well-earned drink in the sunshine and the usual ‘war stories’. It ended up being a great day, with great company and I would like to thank everyone for coming along. I was left feeling positive that the club is developing more white-water paddlers who are not only younger than me, but enthusiastic and keen to go on the next trip.

A special thanks too to Colin, Elena, and Des for all the usual help and guidance.