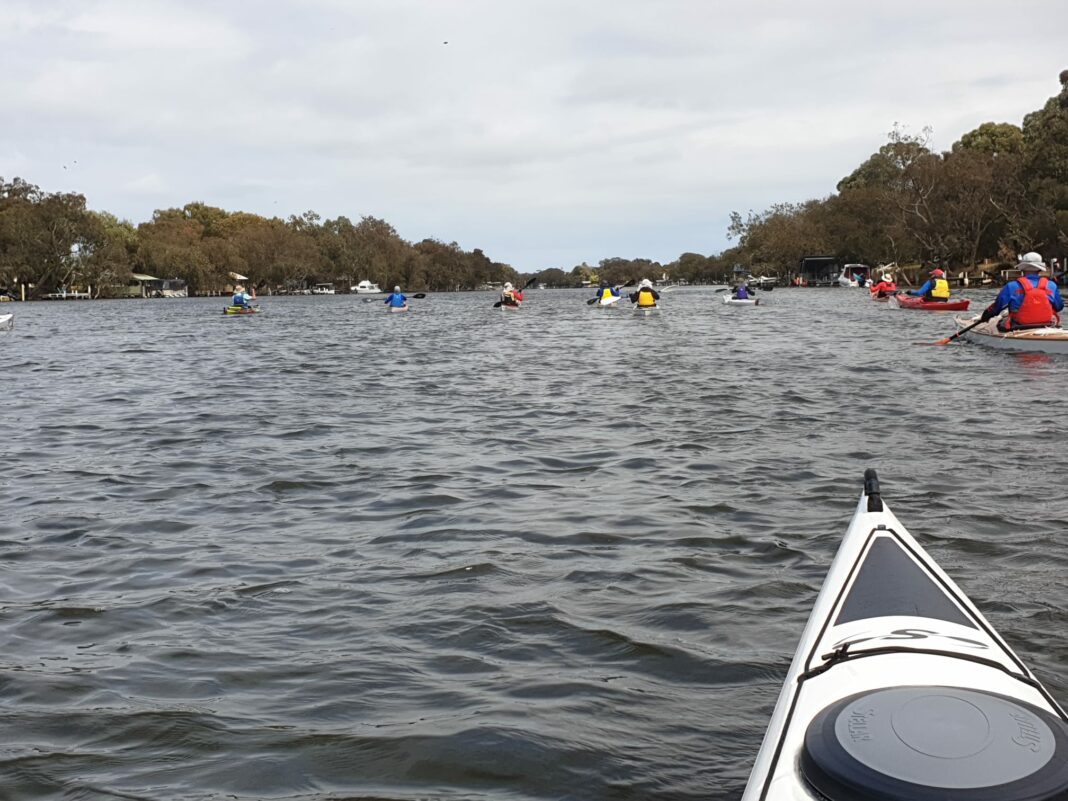 “History is written by the victorious” – and something similar applies to
paddle trip notes when they are written by the Trip Organiser – it’s a
certainty that it will be reported as “wildly successful with glorious weather”!

Starting and finishing at the beach adjacent to ‘Jetty’s Bar and Grill’ in South Yunderup, this half day paddle trip avoids the need for a car shuffle and enables participating Swannies (14 this time) to explore the lower reaches of WA’s Murray River where it forms a multi- channelled delta before entering Peel Inlet, roughly midway between Mandurah and Pinjarra.

We had cool overcast conditions for most of the day with a gentle to
moderate westerly breeze. A small case of Mandurah mist (aka rain) around mid-day, but pleasant paddling conditions overall, and a contrast to the unseasonably hot day before.

After paddling downstream on the main part of the river past an eclectic mix of houses, private jetties and ‘pleasure craft’, we then entered the more un- touched environs of the channels that divide the delta into islands with plenty of natural bush and birdlife.

We emerged from a channel south of both Yunderup and Little Yunderup Islands to pass a sand spit crowded with pelicans (somewhat baffled by our presence) before briefly entering Peel Inlet where we met another group of paddlers. Peter Ormond was eager to try out his newly acquired ‘Valley’ kayak to its fullest extent and created minor mayhem while attempting to spilt up (or ram) the oncoming pack – well done Pete, it serves them right by asking if we were the over 55’s group!

Turning into a channel on the northern side of Yunderup Island we headed back to the main section of the Lower Murray and then across to Cooleenup Island where we had our picnic lunch, and some explored the old Coopers Mill. Surprising few mosquitoes this year, and in the absence of an ‘official tour by the caretaker’ Geoff Vine could recite whatever dates and facts you ever wanted to know (and more) about the history of the place.

After lunch we paddled through the Mandurah mist out into some mildly choppy stuff in Peel Inlet before turning into the lower reaches of the Serpentine River, then around Jenala Island and back to Coopers Mill. The return journey to the main channel of the Murray was via the narrow tree- lined channel on the northern side of Cooleenup Island. Amazingly quite on these back channels with no traffic noise or competition with power boats.

Tony King battled bravely with the skeg of the red Hydra for much of the day, fully admitting he had no control over its direction and it was a bit of a struggle to keep up. After lunch he took a short cut home but we reconnected with him in the main channel on the homeward stretch. So, against the odds, we returned to our starting point with a full complement of paddlers – what more could anyone ask for!

Janet Stanford (a.k.a. dolphin whisperer) made the official count of seven for the day, although some may have been countered twice? Some of us DID see one dolphin do a very speccie jump from the water on the final stretch.

Ross Ladyman demonstrated he was the hard man of the team with his lightly dressed attire enabling us to use him as mosquito bait, although not needed in the end. Clive Jarman impressed the punters by bringing along the result of his wooden boat-building skills, although his relaxed paddling style meant his craft wasn’t a significant challenge to Geoff Emery and Colin Scully’s not-so-secret passion for boat speed.

In the absence of some of our usual bird spotting experts, a local woman walking her dog did however spot not one, but two, of the normally elusive ‘budgie smuggler’ species. Tony and Paul Covolato were responsible for this traumatic sight (and more!) while they were getting changed in the car park at the end of the day.

Well done everyone, a pleasant and relaxing paddle trip for your organiser thanks to your patience and sense of humour. Thanks also to instructors Colin and Geoff for back-up duties controlling this wild rabble!