It’s getting cold out so make sure you stay warm with thermals and cags! Remember as a Swan member, you can get a free Mainpeak Club membership, getting you 10% off merchandise. Email us to activate your Mainpeak membership. 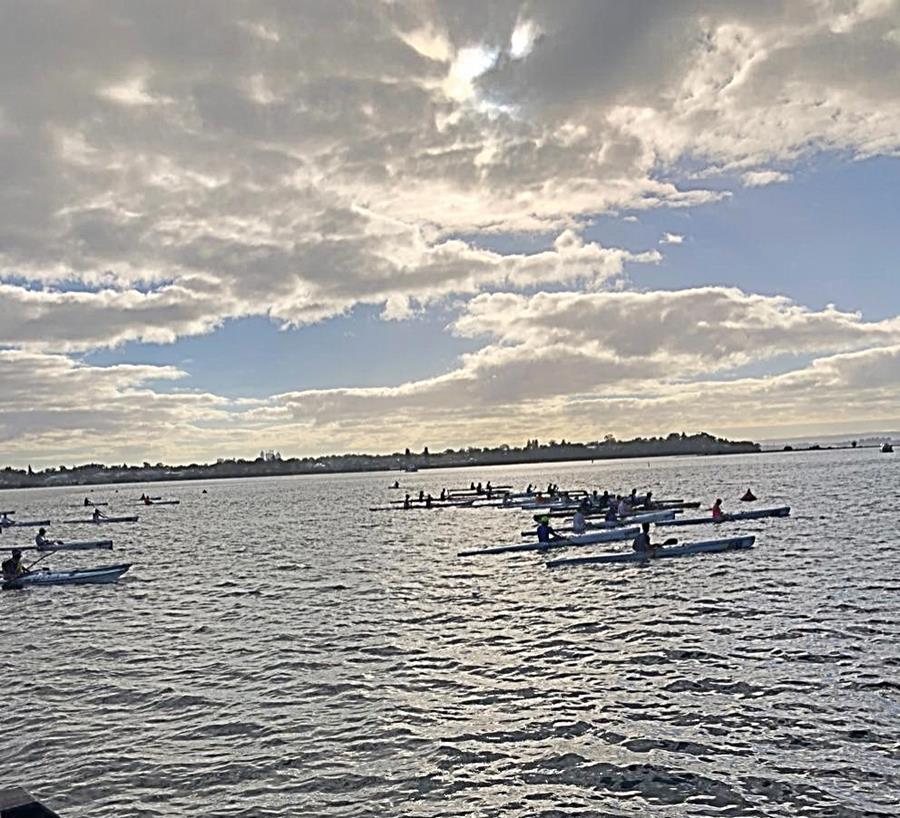 Congratulations to all who competed or volunteered in the Rod Fry. If you missed our report, click the button below! 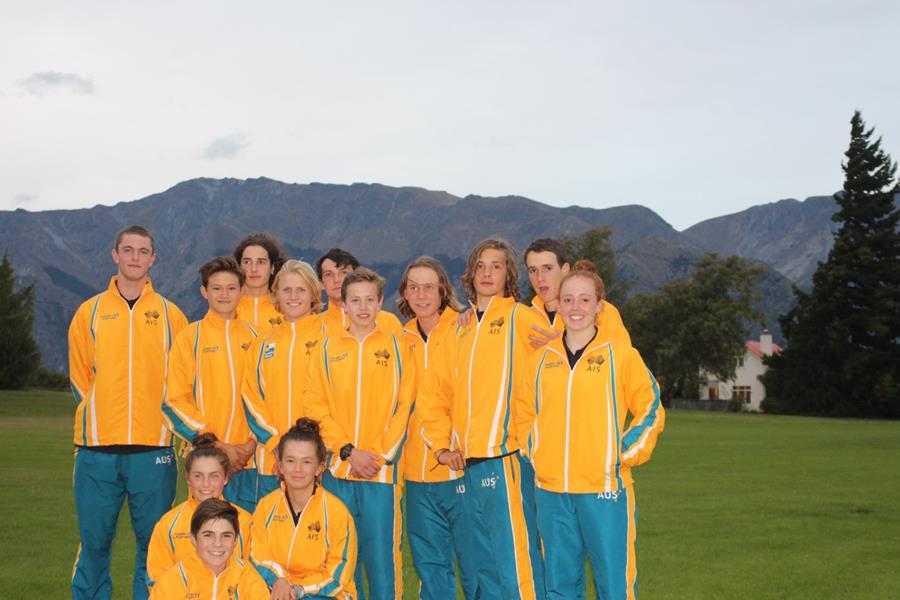 Our junior, Jack Choate, was recently in New Zealand representing Australia as part of the National Talent Squad. He competed in the New Zealand Secondary Schools Championships and Nationals, receiving a silver in MK1, and two golds in MC1 teams. Congratulations Jack!

Jack will be joining his sister, Alexandria Choate in Ivrea, Italy in June this year to compete at the Canoe Slalom Junior World Championships.

This course is designed for people who are new to kayaking. It will provide information on:

It will provide instruction on how to:

Determine the correct length of a paddle
Hold a paddle
Life and carry a kayak
Get in and out of a kayak
Launch and land a kayak
Adopt the correct sitting position while kayaking
Raft up with other kayakers
Paddle forward
Paddle backwards
Turn a kayak
Stop a kayaking in an emergency
Use the paddle to brace to help prevent a capsize
Manoeuvre the kayak sideways
Capsize and self-rescue.

Come along for SCC’s monthly recreational paddle for members old and new.

Paddle from the club to around the local Swan River area with a stop for coffee along the way and then a return paddle to the club. Approx 4km in total. All paddlers and types of craft welcome. 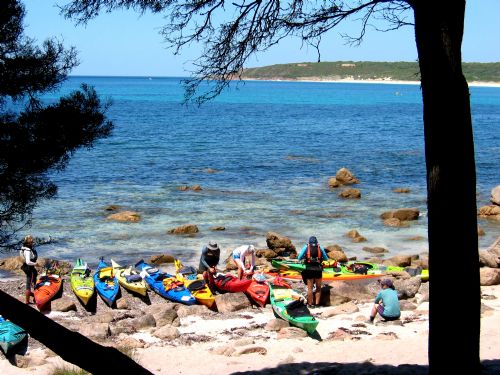 This is a fairly safe and comfortable paddle, especially for those who may not have had much experience of paddling on the ocean. Good oportunity to explore the small islands offshore and get close to the local wildlife.

Only those paddlers who have completed the SCC Intro to Sea Kayaking or are able to provide the instructor with proof of their ability to safely paddle on the ocean are able to attend this trip.

Paddlers must provide their own craft, suitable for paddling on the ocean. If you do not have one you can hire one from the club, please contact the SCC boat hire officer. 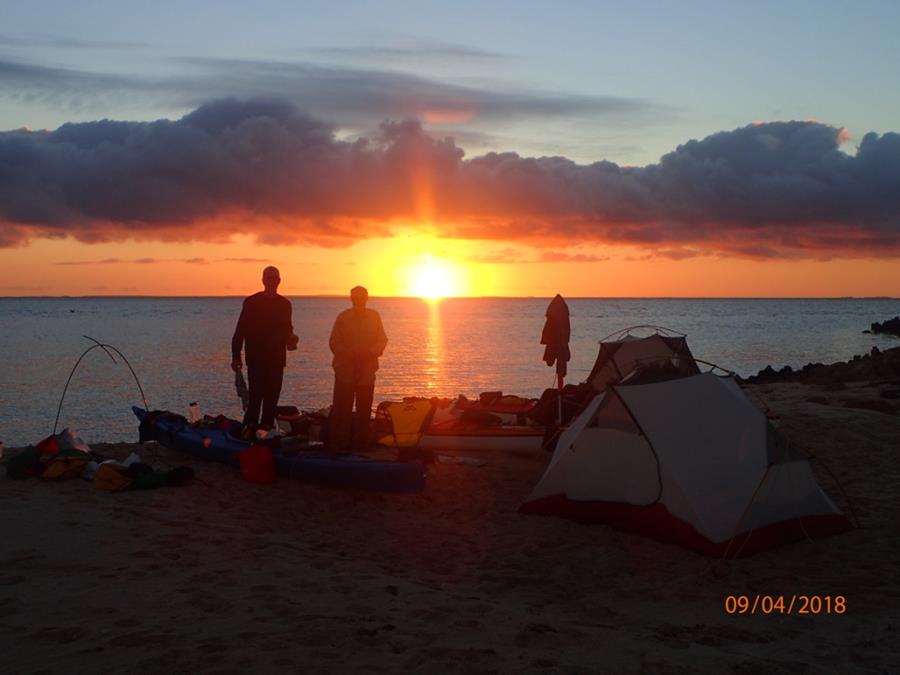 Another Day in Paradise

Colin Priest, Richard Jolly and Geoff Emery – that’s me – planned a paddle to Dirk Hartog Island from Denham, Shark Bay on Thursday 5th April 2018. After the eight hundred and fifty kilometre, ten-hour drive from Perth, a mere twenty-kilometre paddle west from Denham to Heirisson Prong sounded easy. However a southeast wind of about sixteen to seventeen knots (thirty kilometre per hour) blowing up the eighty kilometres or so of Freycinet Reach generated a few waves. Our happy band laughed at adversity and set off with six days of food, camping gear and thirty kilograms of water in each kayak, figuring we needed about five litres a day. The crossing was interesting, as in the Chinese curse, “may you live in interesting times.”

Twenty kilometres and four hours later, three tired paddlers collapsed onto the welcoming sand of Cape Heirisson. As we lay under hastily erected shade between the kayaks, glad to be on terra firma once more, any relief was tempered somewhat by the thought that we had another seven kilometres or so to paddle across to Cape Bellefin before we could set up camp for the night. 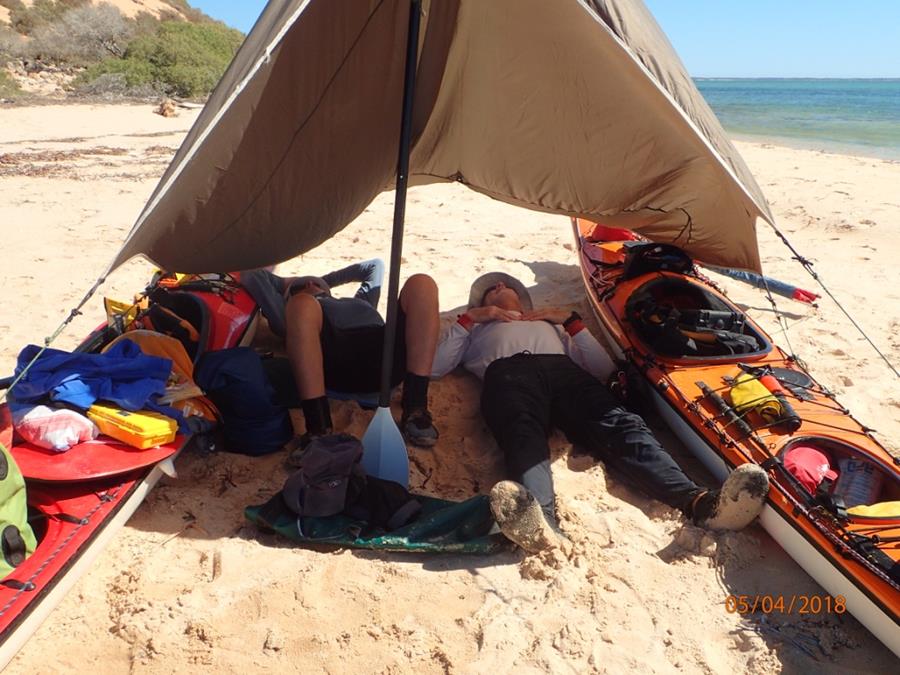 With stiff upper lips – in truth by now we were stiff all over – we paddled across the gap in about an hour and a half and happily set up camp on the east side of the prong. It was an early night for all of us.

Friday we planned a direct fifteen-kilometre paddle to Notch Point on Dirk Hartog Island, but due to a few navigational issues we ended up going more west, then north along the Dirk Hartog coast. We paddled north past Meade Island and the Homestead, following my GPS guide to Notch Point. Around about twenty kilometres from our previous camp a shark decided to nibble the rudder of my Epic 18X. There was a lot of splashing and thrashing – the shark, that is, not me – but the team just laughed at this minor adversity and the shark left us alone.

The camp at Notch Point was beautiful, with a white sand beach, limestone cliffs, and clear green water and of course a few sharks, so cleansing dips were fairly quick. Unfortunately the mosquitoes were so bad in the night I briefly considered throwing myself on the mercy of the sharks. The next morning, as my bladder suggested I should get up, I counted thirty mozzies waiting outside the mesh of my tent for me to make a break for it. I lathered RID all over me before I emerged from the tent, but the mozzies seemed to enjoy the taste of RID flavoured Geoff!

On Saturday it looked like the wind could soon be blowing up to twenty knots or thirty-six kilometres an hour. Despite laughing at adversity our collective sense of humour was wearing thin and we could only manage a half-hearted chuckle. Colin thought we would be wise to head south to camp at Tumbledown Point so that we could escape to the prongs and so back to Denham. Paddling south into a sixteen to eighteen knot south-southeast wind we covered the twelve kilometres in about three hours and set up camp to listen to the wind

After breakfast on Sunday we paddled the nine kilometres to Cape Bellefin for a rest stop and then about seven kilometres to Cape Heirisson into the ubiquitous southeast wind blowing about fifteen knots and gusting to seventeen. Despite the wind we made about six kilometres an hour and took about two and a half hours to cover the sixteen kilometres.

We had a great night on Cape Heirisson, with a cupola of stars above us, navigation lights flashing away to our north and the glow of Denham over the horizon to the east. Believe it or not there were no mosquitoes! We were a bit concerned as Monday was our only window of opportunity before the wind went to twenty knots for about four or five days. Much as we might enjoy each other’s company we weren’t keen to spend four nights on Cape Heirisson!

Initially there was little wind on Monday morning and we got off the beach about eight thirty, counting on Willy Weather’s prediction that the wind would drop en-route. As the southeast wind started to blow yet again we aimed a bit south of the compass bearing of sixty degrees for Denham. On the horizon we had a visual reference, as we could just see the wind farm and water tank behind Denham. Conditions got worse with waves of about one and a half metres and a wind of about sixteen to seventeen knots pushing us off course. We weren’t game to raft up for a break and paddled steadily for two hours. There wasn’t a lot of laughter on the way back as we wondered how we would manage a capsize in the current wave and wind conditions.

Finally we rafted up for some sustenance and being on the lee side of the raft I took the opportunity to mop out my cockpit as I was taking water through my spray-deck. Our three paddles were balanced across the decks in front of us as we grabbed some food and rest and I mopped my cockpit. I was surprised to see Richard’s paddle sliding by on the port side of my kayak and managed to grab it, which was when I realised that mine was missing! No one had seen my expensive black carbon Werner paddle make like a lemming and escape the raft! At that moment I began to wonder if crying at adversity might be a better option!

Richard passed me my breakdown paddle from the rear deck and after assembling it I left the other two in the raft while I made a fruitless search back along our track. Eventually I abandoned the search and somewhat subdued we paddled on and made it to Denham after about three and a half hours. Physically and psychologically we were pretty spent. A hot shower, clean clothes and a couple of low calorie pies later I was a feeling almost human again. As I became more philosophical I began to think that if the loss of my paddle was the only crisis in five days it had been a pretty good adventure. 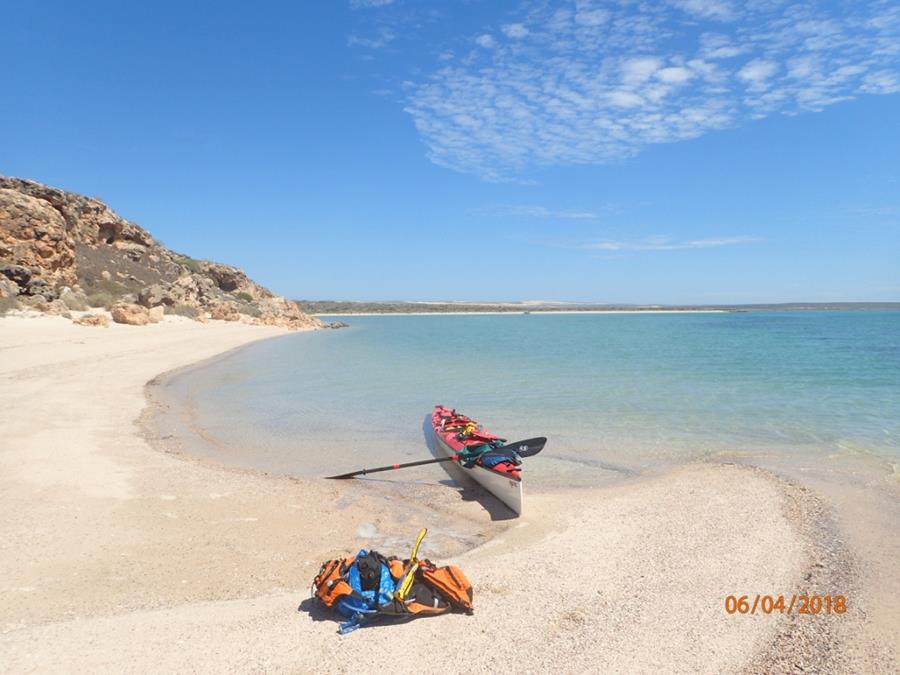 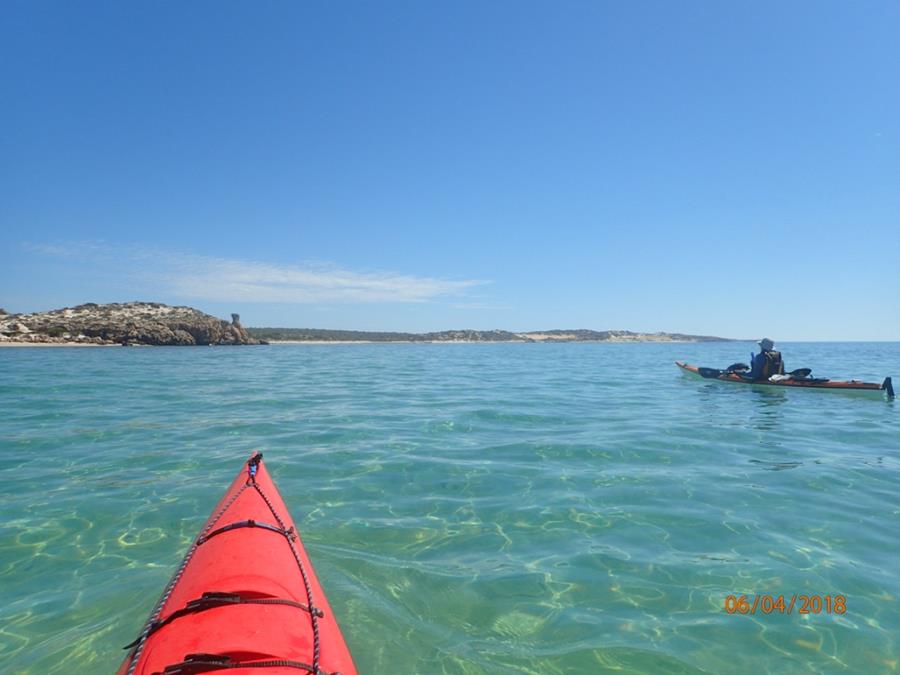 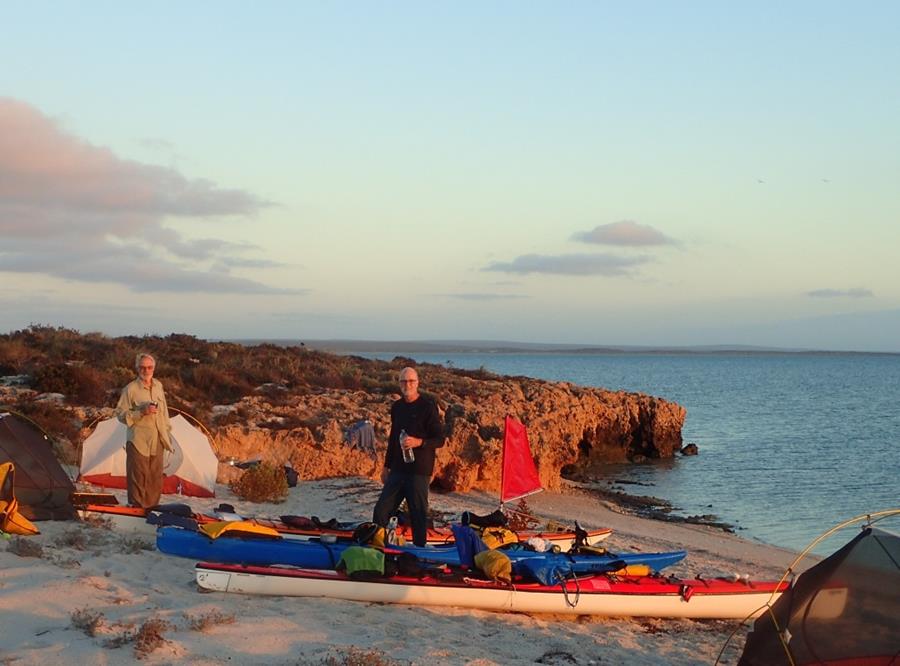 If you have any stories you would like to submit, send them to admin@swancanoeclub.org.au 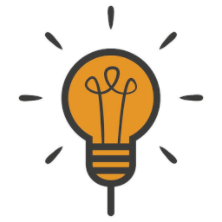 The upstairs area will be unavailable for members on these dates:

For those of you with boat-spaces, please ensure that your name and number is visible on your craft, and please return the new terms of agreement form!

Our new spotlight can now be used via a switch next to the hose in the boatshed. Please ensure that it is turned off after use. 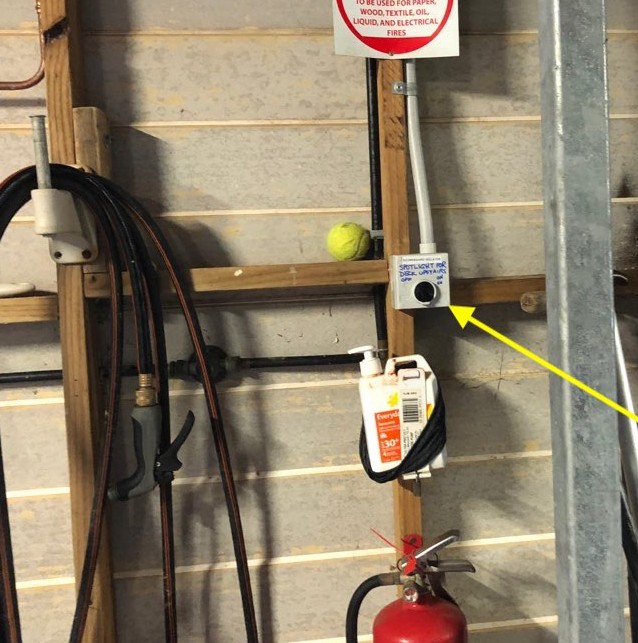 Thank you to Paddlesports Megastore for their continuous support to Swan Canoe Club.