The Rod Fry Memorial Race is an annual event that is scheduled in late summer / early autumn as part of the PWA Marathon Series. This is Swan Canoe Clubs big race event of the year and brings together paddlers from all over the metropolitan area via for a part in the prize pool.

The event is facilitated by a large team of Club volunteers with the support of Fremantle Sea Rescue, PWA (including Marathon and Slalom) and our generous sponsors.

Registrations are open approximately one month prior to the race date. 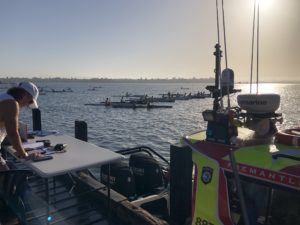 There are three race distances with the 12km being the most competitive and the 3km being predominantly intended as a guppy event. The 6km is particularly popular with SUPs.

Age categories are sorted according to ICF rules, the age you were on the 1st of January.

Race class constitute: Male – 4 craft to a class, Female – 3 craft to a class. Open class will be constituted first in each craft class and classes constitute by age thereafter. If paddling as a double or team choose open age category if at least one paddler is between 19 and 35 years (inclusive). The race organiser reserves the right to combine craft to form a class. 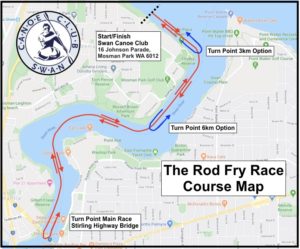 His competitive achievements are numerous.

In State and Wild Water championships he consistently came first and second.

At the National level, Rod was known for his successful partnerships with Lydia Formentin, winning both the Wild Water Open Mixed C2 and the Slalom Mixed C2 classes in 1983 and almost duplicating the feat in 1984. He had further successes in both Slalom and Wild Water events over the years, most recently in 1993, just two weeks before his tragic road accident.

Rod was a valued member of Swan Canoe Club for twelve years. He was a quiet achiever who will be remembered for his enthusiasm and encouragement of others, and his skill and dedication to C1 and C2 paddling.