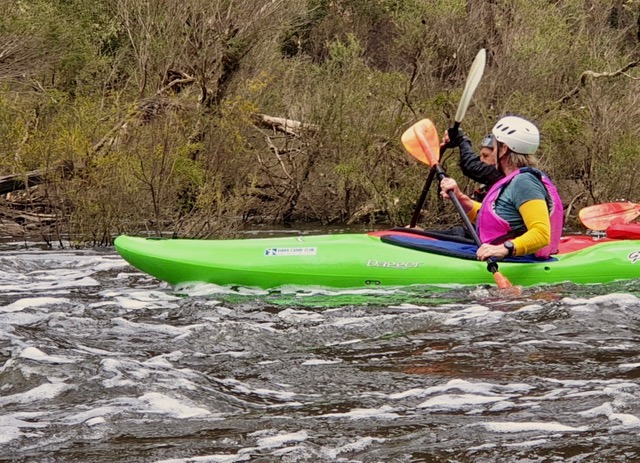 An intrepid crew of Swannies met at the Dwellingup Hotel last Sunday, ready to tackle ten kilometres of the Upper Murray River from Yarragil to Baden Powell. Intrepid because with a few exceptions, most hadn’t had a lot to do with white water, albeit it was grade 1 and 2.

Colin Scully and Geoff Emery had done a paddle during the week with Baden Powell at the 2.0 metre level, to look for hazards such as logs and found it clear, apart from a few friendly thickets. In fact, the biggest hazard were the potholes on the gravel road between Baden Powell and Yarragil! Our group of twelve paddlers in seven vehicles bounced up to Yarragil where we left boats, gear, and non-drivers while the vehicles all made the return journey to Baden Powell. Geoff and Dave Gilbert brought the shaken and stirred drivers back to Yarragil and parked there.

Once on the water Colin and Geoff led the way with Gillian Henderson and Steve David while Des McLean and Colin Priest were our tail-end ‘Charlies.’ With the water level having dropped a little to 1.8 metres some rapids were no longer washed out and after a kilometre we had a pleasant rapid to play on. Everyone had a go at ferry gliding from side to side, remembering to lean or edge downstream and breaking in and out of the eddies. While there were a few wobbles there were no swims.

Emboldened by the new skill levels we all enjoyed navigating the next three or so kilometres, dodging small logs and large thickets and the occasional rock and arrived at Island Pool, a grade 2 rapid. I was impressed that everyone ran the rapid. Gillian did a great run through but celebrated prematurely and hit the eddy line and decided to swim. Once we were all through there was a bit of playing with Des and Colin Priest the stars, both rolling successfully in the rapid. Beck Wong and Steve David were feeling a bit hot and decided to have a swim to cool off, but everyone else was comfortable in their boats. Julia Davies was having fun in the Finnatic, and Dave was puffing along in the Corsica. Jocelyn Sisson looked relaxed and like she was enjoying herself, while Amanda Simper had difficulty wiping the grin off her face. Shantha David looked totally in control in a Dancer, even if it was the first time in twenty odd years!

After a lunch break and change of clothes for some, we pushed on another four kilometres to Bob’s Crossing where water was going over the road. We all portaged on the right and got back into the fast flow again for a little play before heading downstream. Baden Powell came into sight after a couple of kilometres, and we pulled up to the steps to get off the water. Geoff foolishly decided to try rolling his Mamba and failed! A second attempt with a Pawlata Roll also failed leaving him wet and red-faced. Des wisely commented that one needs to keep practicing. Thanks Des!

Back on terra-firma we all got out of our wet gear, tied the boats on and collected the cars from Yarragil. The drive home was a bit tiring and anti-climactic, after the long day on the water. I really enjoyed the paddle and was very impressed that everybody had a go and had fun, even those of us who got wet! I agreed with the sentiment that it was a paddle worth doing again. Thanks to Colin Scully, Colin Priest and Des McLean for all the help and advice. 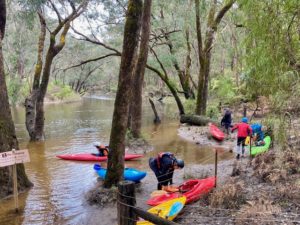 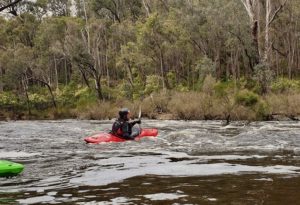 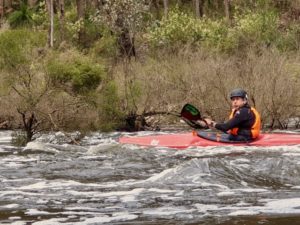 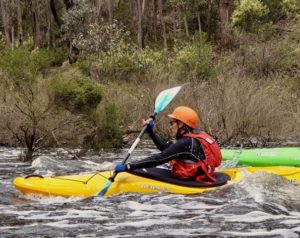 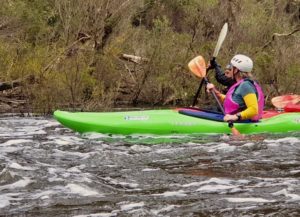 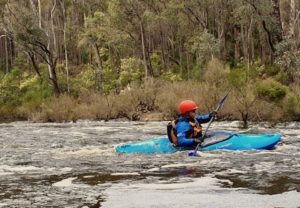 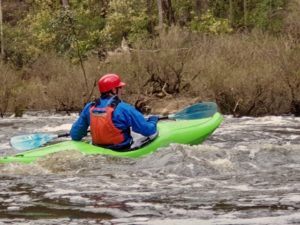 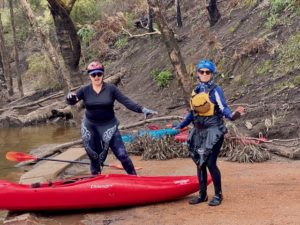 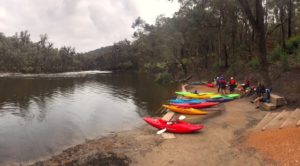