A fantastic end of year celebration was enjoyed by over 65 members and partners. By all reports the food and entertainment was excellent and everyone had lots of fun. Thank you to the Social Committee and particularly Carol, Lisa, Janet and Christine for all their work in running this event.

Club Awards were announced during the dinner with the following recipients recognised:

Jordan has participated and trained as a member of the West Australian Slalom Pathways Squad (WASPS), competed at the Age Champs in Tasmania and National Championships and Australian Open both in Penrith.

Paddler of the Year – Travis England

Club Member of the Year – Rebecca Wong and Martin Wells

Rebecca was nominated for her involvement in peer and club paddles. She helps with organisation, supports fellow paddlers with skills and techniques and is very inclusive enabling many new and ongoing paddlers an enjoyable experience. Rebecca has also qualified as a guide this year as well as taking on the role of Secretary in the SCC Committee.

Marty was nominated for his passion for paddling and willingness to share with others as best demonstrated through his much enjoyed Murry Delta Paddle (which was mentioned in many nominations!). Marty also qualified as a guide and is an active member of the peer paddles, T&D Committee and generally supporting Club activities.

Patrick was nominated for so many awards however it was decided that Hero was the best fit! Not only has Patrick’s paddling improved amazingly over the last year but he has also put in endless hours maintaining things at the Club. He is always fixing and replacing hoses and washes, gardening, sweeping helping move boats, assisting other paddlers and generally being a nice guy. Many members showed their appreciation for Patrick’s efforts through multiple nominations. A well deserved award.

Thank You and Other Awards

Beau and Connor Jacobs – most improved paddlers (and ones to watch)

Paul Covalato – for a water incident at Zephyr

Andy Hewlett – Stirrer of the Year resurrected from history for an incident at the Halloween Paddle!

May 2020 Newsflash and COVID Update link

Sunday the 6th December dawned with blue skies, sunshine and the promise of wind. Not the sort from baked beans, but the sort that blows strongly from the south west. Undaunted, fourteen intrepid Swannies arrived early at Palm Beach and girded up their loins and their kayaks for the eighteen-kilometre return paddle to Penguin Island. After a brief beach briefing, they headed off under the Garden Island causeway under the guidance of Geoff and Colin. The wind was blowing at about fifteen knots, but Swannies laugh at danger.

After repairing a dodgy rudder on the Scorpio (thanks Pat) and dodging a few power boats, the causeway was left behind and the group paddled onward toward John Point. Three Sea Kayak Club members paddled by us on the way and we called a hello to Jill and Judy. Low tide meant a few challenges navigating south behind Mushroom Rock toward Point Peron, but Swannies love a challenge.

Guided by Russ, we made it safely to the shelter at Bird Island and had a breather in the lee of the island. From there we headed south for Seal Island, aware that the wind was swinging more south and with the south west swell, causing a few waves to break on the reef. The conditions were a challenge for some of our newer members, including one paddler who was on the sea for the first time, but of course Swannies love the sea.

Somnolent sea-lions slumped on the sand at Seal Island, but squadrons of pelicans practising their formation flying and synchronised beach landings made up for the lazy sea-lions. It was good to be in the lee of the island out of the wind again, chewing thoughtfully on a jelly baby. Graeme was having an ornithological moment, getting in touch with his inner twitcher and of course Swannies all love birds, don’t we Karen?

With the wild wind and waves, we were all pretty happy for discretion to push aside valour and land on the sheltered east side of Penguin Island for a bite to eat, a bit of leg stretching and to answer the siren call of nature. A few of us checked out our usual landing site on the seaward side and were impressed by the rocks and white caps. Swannies do love rocks it’s true, but not when they’re banging against our precious kayaks.

With the wind kicking up over twenty knots or about thirty-six kilometres an hour from the sou-southwest we all were having thoughts of the homeward trip. It didn’t take much encouragement to mount up again, push through the sea grass and so into deeper water. Geoff struggled with his sail at the back,  as the other paddlers disappeared toward Seal Island and after nearly getting blown over, decided to paddle instead. Pat was looking forward to the waves and of course  Swannies love the waves.

It was a fast trip back and despite the wind pushing a few of us onto shallow reef, we all stayed upright and almost dry. The wind was still blowing hard after we turned the corner at John Point, but we were starting to feel more relaxed with the causeway in sight. After bouncing through the chop and under the causeway we were all pleased to see the sand at Palm Beach. As you may have guessed, Swannies really love the beach.

As we packed up with the wind blowing at about twenty-one knots, I was impressed that one of the Sea Kayak Club WA members drove by to check that we had got back safely. Thanks for a challenging paddle to Colin, Russ, Rowan, Tracey, Claire, Janet, Rebecca, Des, Mike, Mark, Trevor, Patrick and Graeme. To borrow from Henry V and assuming the girls are honorary brothers  “We few , we happy few, we band of brothers:” can look back on St Crispin Day or any day for that matter and say we were there and we survived!

Anyone interested in joining Club paddles on the sea in the future should keep an eye out for the Intro to Paddling a Sea Kayak Course in next years T&D Intro Series – more dates to be issued shortly.
The course content can be viewed here

From Saturday 5th December, SCC is required by the WA Department of Health to maintain a Contract Register for COVID-19 contact tracing.

Failing to comply with the new requirements to maintain a contact register could result in fines and penalties of up to $50,000 for an individual and $250,000 for a body corporate or 12 months’ imprisonment.

To make this as easy as possible for our members, their guests and other visitors there are 3 ways to register attendance at SCC: 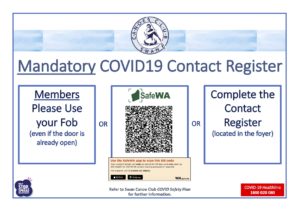 Members are always encouraged to use their fob and if used no further recording is recording. If you don’t have or use a fob, you must either use the SafeWA App to scan the SCC QR code or complete your details in the manual register.

Details of the SafeWA App are available on the Western Australia Government Website.

Children under 16 are not required to complete their details – however this is encouraged.

A new COVID-19 Safety Plan for SCC is displayed on the noticeboard or available through the following link:

Remaining boats are now available by donation of $50 – $100 on a first comes first served basis. Please email admin@swancanoeclub.org.au your offer.

Boats for Auction are stored in the following racks:

The SCC Paddle Rally was held on Sunday 22nd November. It was a fun afternoon of paddling against the clock whilst interpreting clues and recording answers. Drinks and nibbles were enjoyed on the balcony after the presentation. Members looked after each other with Geoff sacrificing some time to render assistance to a fellow paddler and Patrick accompanying a new member – including providing a tow.

Congratulations to Graeme and Grace who won the event even though Graeme had to back track to the Club to get a new pencil after loosing theirs at Chidley Point. Grace used the time to count all the steps at Chidley Point helping them win the day!

About 35 SCC members attended the Halloween Moonlight Paddle and helped build the mood of the event by dressing their boats or themselves in Halloween themed costumes, including a skeletal paddler proving that old paddlers never die, we just get dry bones. We enjoyed a very spookily decorated club room and feasted on eyeball jelly cups and spider egg muffins. The weather was balmy and the full blue moon was beautiful.  A big thanks to Andy and Sue for the decorations and catering.

The Murray River is only one hour from Perth, but feels a million miles away. Guide Marty Wells, assisted by the two Geoffs, led a group of 18 on a lazy 16-kilometre paddle around the lower Murray’s southern and central river channels and deltaic islands.

After paddling past the riverside shacks and mansions on South Yunderup Island, the group picnicked on Cooleenup Island and explored the historic Coopers Mill. They were greeted by the caretaker of the Mill who explained how the islands are vegetated sandbanks, prone to extreme flooding and at risk of disappearing within 20 years. Oh, and if you park your car on the opposite bank, it is likely to be vandalized and burnt out.

It isn’t all environmental doom, gloom and hoons. The area is rich with birdlife and the water teeming with crabs. Karen and Graeme, the club’s resident ornithologists, made sure the rest of the group knew exactly what they were looking at.

Everyone agreed the paddle was a huge success and needs to become a regular event and an ice cream stop on the return paddle should be compulsory for all trips.

Congratulations to Geoff Emery who was recently selected as the PWA Instructor / Guide of the Year for Western Australia. As the WA winner Geoff has also been nominated for the Australian Award. 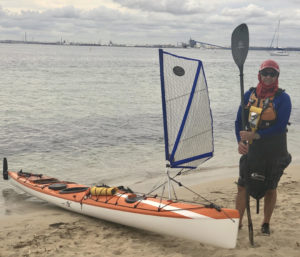 Through the Swan Canoe Club (SCC), in the past year Geoff Emery has taught dozens of people to paddle flat water, white water, sea kayak and Eskimo roll. He has taught members and non-members alike, ranging in age from ten to well over 80. He has guided sprightly seniors down rapids on the Blackwood River, instructed novice paddlers how to navigate the swell off Penguin Island and led experienced sea kayakers on expeditions around Albany. With patience, clear instruction and good humour, he has helped newbies discover the joy of paddling and more experienced paddlers develop their skills.

Geoff gives freely of his skills and time. He is a member of the SCC committee and has previously served as secretary and chairman. He also chairs the SCC Training & Development committee and ensures the club offers a year-round calendar of courses and trips to further skill development.

Somehow, he has managed to find the time to do all of this while working as a GP in his own medical practice. He recently retired in May 2020, just after his 70th birthday, freeing him up to spend even more time on the water.

A joint Swan Canoe Club and Sea Kayak Club WA paddle from Coogee Marina to SCC was enjoyed by all who paddled on the 25th of October.