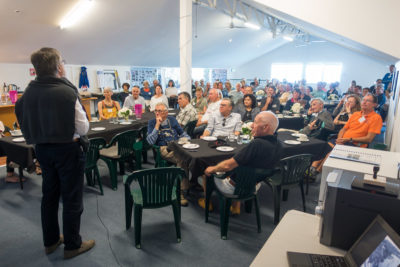 On the 12th November 2016, Swan Canoe Club celebrated its 50th anniversary with two very special events: an afternoon tea for all past Club Presidents, Life Members, Club Members of the Year and other significant contributors to the Club over this period. And in the evening a party was attended mainly by current Club members. The afternoon gathering brought back lots of wonderful memories. On display were a range of old Paddle magazines, clothing and four giant murals covering the years early years to 1979, 1980s, 1990s & the 2000s with historic photographs, Paddle articles and newspaper clippings.  A slide show was running which also included archival movies of some of the first homemade wooden kayaks running rapids on the Avon!
Four speeches were delivered:
21 Presidents came along and we managed to lined them all up in order of their service for a unique photo.

21 Club Presidents! Click on photo to see a higher resolution version.
Lots of photos were taken at the afternoon tea – see the slide show below.
You can also enjoy most of the material displayed on the day:
These events took a mammoth effort to organise, largely done by the Tuesday and Friday morning peer paddling group lovingly named The Ducklings – many many thanks for your efforts.
Also we need to thank the people who delved into their archives and lent us precious historical photographs, magazines and newspaper clippings, particularly Peter Dear, Colma Keeting, Geoff Davies and Colin Thorpe.
We hope to publish a commemorative book, so if you have material you think could be included please email us.
[slideshow_deploy id=’1052135′]