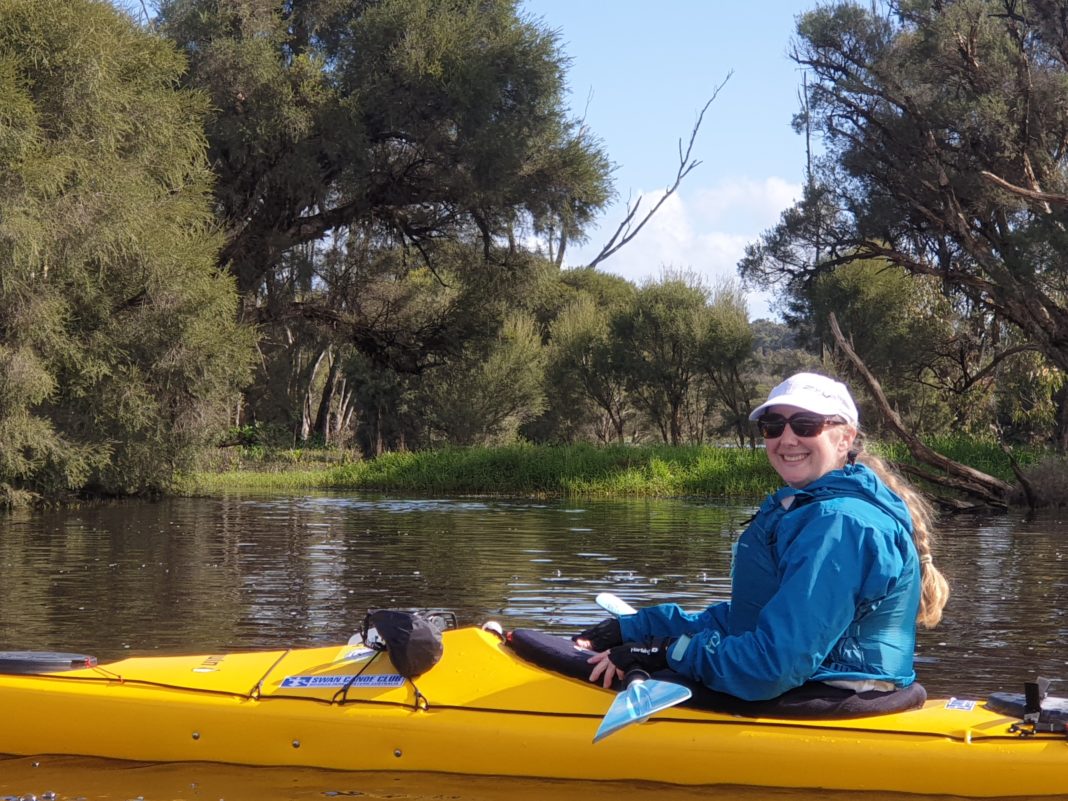 With the heavy rain and the river rising from 0.45 metres to over 1.2 metres, this twenty-kilometre paddle down the Serpentine River was looking in doubt. Some paddlers were in doubt too, with colds and car breakdowns, but come 9.30am, Sunday 7th August 2022, eleven intrepid Swannie paddlers entered the Serpentine at Karnup Road and paddled south, assisted by a gentle flow. The Dog Hill Station on the Serpentine River was showing about 0.45 metres, a Goldilocks water level. It appeared that the rain gods had heard our prayers and there were even patches of sunlight showing through the grey clouds and while we didn’t break into song, the sunlight lifted our spirits and helped us on our way.

Our happy band included Colin, Trish, Marty, Vicki, Steve, Val, Nick, Kelly, Gillian, Fran, and Geoff. Dodging bushes and trees, we cruised down to Kerulup Pool, and navigated around the Water Hyacinth boom net, by paddling across flooded ground. Finally, we arrived at the small lake above the maze of trees, reeds, tiger snakes and swampy ground at the top of Lake Amarillo. The route wasn’t very clear, and Geoff’s navigation left a bit to be desired, as paddlers disappeared amongst the reeds and paperbark trees. Fortunately, there weren’t many drop bears in evidence and apart from one spill, we all finally emerged among the dead trees at the top of Lake Amarillo, a little battered and bruised but not bloody.

Paddling across Lake Amarillo the wind kicked up, the rain came down and several black swans decided they’d rather be flying and took to the air. Once across Lake Amarillo, we turned right and took the short-cut where the river is trying to form ox-bow lakes. On the way we navigated another Water Hyacinth boom net and then arrived at Limbo Bridge, ready for a lunch break. The bridge is unhappily listing upstream and reluctantly answering the siren call of gravity, making the gap under the bridge tight. Getting under it , while staying dry, requires either some limbo or downward dog and the river flow adds to the challenge. Most of us got through unscathed, but one unlucky paddler got caught sideways against the bridge and was rolled upstream, the current pinning her boat to the bridge. Fortunately, Marty, assisted by Colin, managed to rescue the situation and the paddler, despite being attacked by a dangerous steel cable strung between the bank and the bridge.

Having survived the bridge and covered about eleven kilometres we were all happy to stop at Lunch Island, stretch our numb legs and answer the call of nature. Kelly excelled herself as usual, by providing everyone with fresh bread rolls and slow cooked lamb covered in hot gravy! Luxury, total luxury! After a relaxing lunch break, we climbed into the kayaks and headed off west and south into Guanarnup Pool, paddling against significant fetch from the west wind. From there we wound our way into Yalbanberup Pool, where several squadrons of Pelicans were on the ground having a committee meeting, presumably to discuss the flying weather. Not long after emerging onto the pool, the Pelican pods broke up and they began to get airborne and work the thermals, slowly disappearing into the clouds.

Entering the narrow section of river near the end of the paddle we were surprised by the number of Nanking Night Herons lurking in the trees. I wondered if they were trying to get on camera, as there was a nearby solar powered camera perched on a metal pylon? Arriving back at Woodland Parade about 2.30pm, after yet another excellent trip, we were happy to load up and head home. Thanks again to everyone for the company and especially to Marty, Colin, Steve, and Gillian for helping and for just being there.